Saturday got off to an early start, with quite a lot of us already in the breakfast room by the time I got downstairs.
Tables were already mostly filled with groups chatting and eating, so I found a tucked away table for two and ate breakfast (mmm, bacon) while I watched others. (not in a creepy stalker way)
I was soon joined by Denyse who was also looking for a place to sit and had noticed me on my own.
Denyse is a retired school principal who writes about schools, talking to teachers, assisting parents and also does guest posts for blogs.
We got on quite well and I was happy to have met her.


I was part of Veronica's Meet and Greet team and was looking forward to saying hello to absolutely everybody, not just the people I had met the day before, and handing out swag.
In reality this didn't happen.

Over the years I've become used to greeting people at the checkout, saying hello, how are you, blah, blah, blah and I thought this would be similar so I'd be okay.
Well! Clearly I don't know myself as well as I thought I did.
I tried and I did manage to hand over a couple of swags, (goodie bags), but I was very glad to be partnered in this with Naomi.
Naomi is a cheerful little livewire who isn't at all shy and wanted to meet everybody before handing over a swagbag. We soon worked out a system where Naomi checked people for name tags, said hello and handed each one a swag bag from the table..... 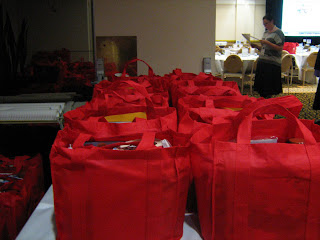 ...while I kept the table stocked with bags from the huge pile on the floor. 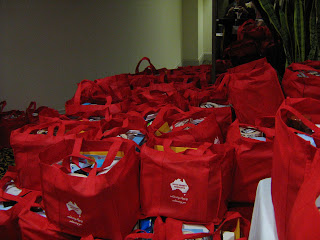 A few people walked past and picked up their own bag only to have Naomi call out, "hey, come back here, I want to meet you before I hand you a bag. Have you registered? Do you have your name tag? I want to know who you are!" Then she'd hand them the bag they'd picked up! 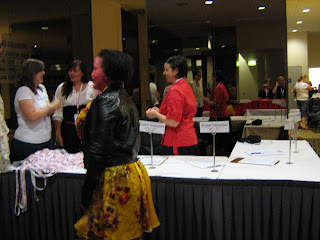 Carly walking past the registration table.
And what a bag!!
I'd been expecting to hand out smallish goodie bags with maybe a couple of small gifts and a few business cards from BlogCon sponsors.
(Kleenex, Dyson, Rubbermaid, Nuffnang),
but just take a look at this!! 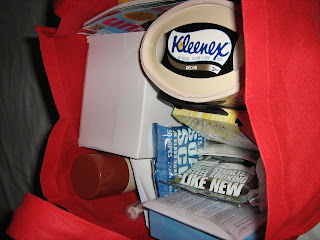 Lots of Kleenex goodies.....
What's in that white box over on the left? 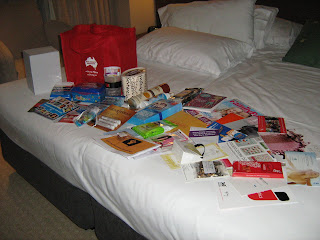 This cute little pink piggy bank!
So that we can all start saving for next year's BlogCon, of course! 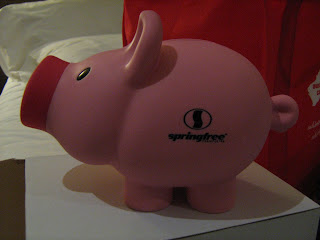 Meet and Greet progressed smoothly, people registered, received their name tags and came to our table for their swag, then headed into the conference room to find their assigned seats. 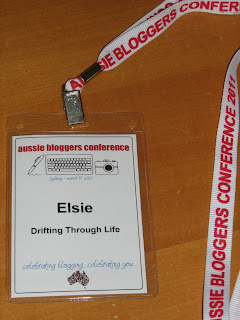 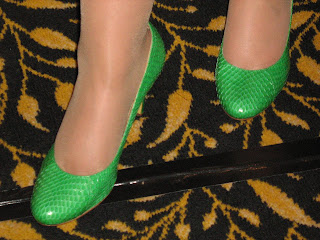 and Veronica's tiara and veil. 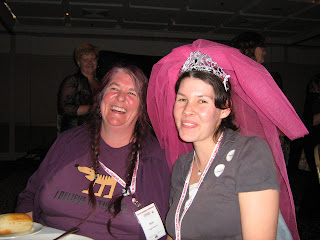 Kim and Veronica
Close to 11pm, I was yawning my head off, so I left them all to it and went up to bed.
To be continued......