snippets of my day

March 11, 2011
Finally, after years and years and years, (well that's what it seems like), I have ripening tomatoes.
Tomorrow, there'll be tomato sandwiches for lunch. 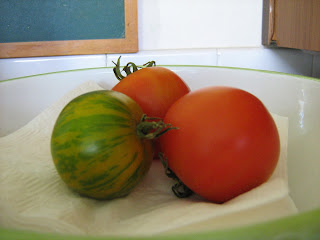 I had a lovely lunch in town with K today, we've been eating from a chinese cafe called The Dumpling Box for the last few weeks, but today we tried a place called The Muffin Box, or Muffin Basket.....Muffin something.


They have a daily savoury muffin, today's was spinach and fetta, plus a large range of really yummy looking sweet muffins. Strawberry, with a little cream and halved strawberry on top; orange and lemon, with glazed thin slices of fruit on top; and many more. (Double choc-chip). I meant to go back after my shopping and bring home a strawberry one, but I forgot......they also have a nice selection of wraps, so I chose a chicken satay wrap for my lunch, ate half and brought the other half home for dinner, but it was kind of squished, so it's still in the fridge, while I decide its fate.


One of our major department stores is closing next week, with all stock being moved to a new location while the existing building is torn down and rebuilt. Most stock has had major price reductions for the last few weeks, so today I went in and bought a new handbag. Reduced from over a $100 to $39. Red, with a brass buckle. There was a matching smaller version in black.....I couldn't decide which to get, so came home with both.


Later this afternoon I had another physio session, where we discussed my upcoming trip to Sydney, (Yay, BlogCon!), and he (John), mentioned that his wife reads a few blogs and did I just read or do I have a blog?
So I gave him one of the cards I'd had made.


Then I wandered down towards Coles to check if we were open next Monday. It's Adelaide Cup Day, but since we don't close for Melbourne Cup Day, I wasn't sure.
On the way I saw this---> 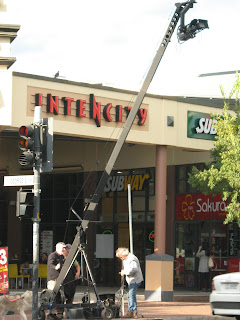 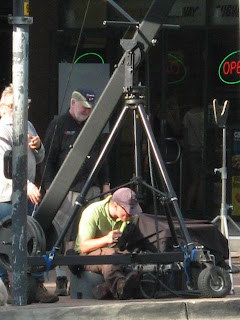 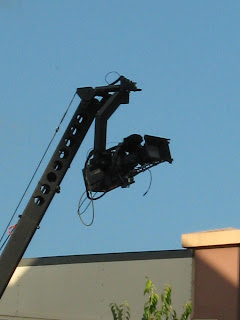 A sky high camera.
Naturally, I walked over and asked what they were doing.
Them: Setting up a camera.
Me: what for?
Them: to take pictures
Me: Why?
Them: because we can.
Me: but what for? A newspaper article? TV program?
Guy who was answering turned away, clearly didn't want to say anymore.
Other guy: It's a promotion.
I didn't want to cause any trouble for him, so I wandered off, crossed the road, and took these photos.
On the way home, I watched for a minute while they turned the base in a full circle so their camera took 360* photos of the tops of the buildings at that intersection.
Now I'm eating dinner - spinach and ricotta agnolotti, yum.
But no strawberry muffin.........Sigh.