today I tried something new....

March 12, 2011
.....and it wasn't at all hard.
Usually, I upload photos to my computer via the camera/computer usb cord.
Today, I took the SD card out of the camera, inserted it into the SD slot on my laptop and uploaded these photos.


Those of you who know Adelaide, will know Harris Scarfe, one of Rundle Mall's major department stores.
Harris Scarfe is closing down next week, so for a month now, all stock has been drastically reduced in price. They'd rather sell it quick than have to move it to the new location, according to the loudspeaker announcements.
I'd walked through several times, always being drawn to the bags department.
Hmmmm, bags.....


I'd had my eye on a lovely brown handbag which was reduced from over $100, to $39.
When I went in yesterday the handbags were not in the usual place.
I asked an assistant where they might be and he said they're probably all sold.
I was crushed.
My beautiful handbag, gone, to some one else.


I walked on to the next department, shoes, and there they were.
The handbags!!
I had a look for my much coveted brown one, but it wasn't there.
Gone, to someone else.


But there was a red one, identical in style and size, so I picked it up, then I saw another, smaller black one, again identical in style. But the black was priced so ridiculously cheap, I had a quick look around to be sure I wasn't accidentally standing in "Cheap As Chips". (discount store).
For that price, I certainly couldn't leave it there.
So both bags came home with me.


Both bags have brass fixings. 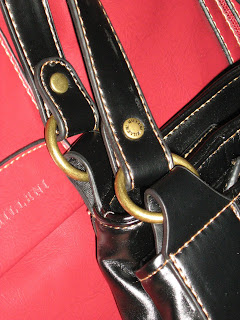 Both bags have a small zippered compartment on one side of the front. Handy for small items like bus tickets and boarding passes. 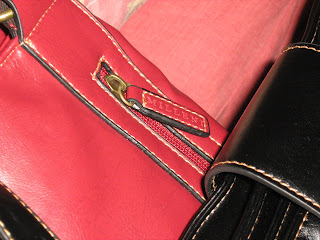 Both bags have a decorative brass buckle. 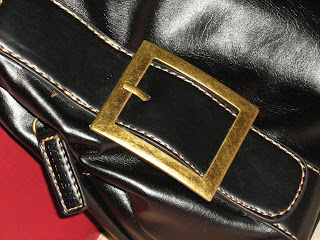 Both bags look rather classy. Well, that's my opinion. 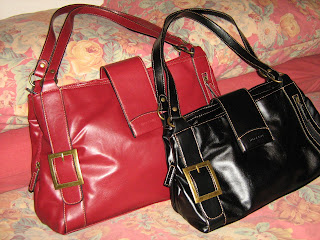 The red is coming with me to Sydney and the black will be my
"lunch and shopping in the city" bag.
The "police line" bag I originally intended to bring?
Well, it's a shoulder strap bag, canvas, quite heavy, which drags against neck muscles which are still somewhat achy.
Plus none of its many pockets has any type of closure.
They're all open under that big front flap. Pickpocket heaven!
And......it doesn't look good with the new shirt my girl T has bought me.