August 20, 2010
Early this morning I was lying in bed, being lazy, as I sometimes do, when I glanced over to my shelf and noticed Henry.
Henry is a stuffed bear, and yes, all my stuffed animals have names. It's a childhood carry-over.

Henry is a calico signature bear, you may have seen these in Post Offices and newsagent/gift shops a few years ago.

Way back in 1999 when I heard the shoe factory was closing down and moving operations offshore, I wanted something to remember all my friends by. 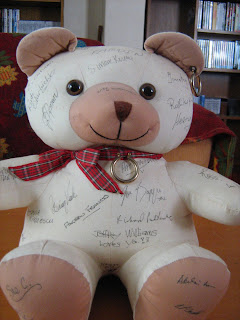 I took him into work and sent him down along the mens shoes production line that I'd been working on for the last 9 years.(Hush Puppies.) 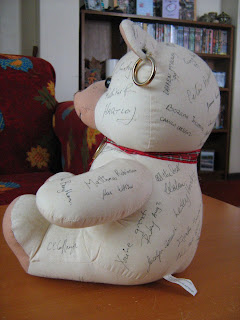 From there, Henry moved into other factory areas, the womens shoes line, the very large childrens shoes area. You all know the Clarks Kids range, I'm sure. School shoes, first walkers for babies, toddler shoes. 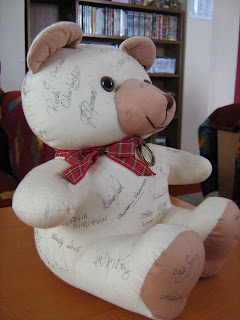 Even the line Supervisors put their names on Henry.
After doing the rounds, Henry wandered into the Office areas to be signed by some of the bosses. Including our Union Rep, who just happened to be there on the day. 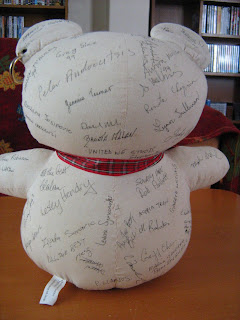 Many of my friends had already moved on to other jobs, so I didn't get Henry completely covered in signatures as I'd hoped to.
The last person to sign Henry was Maxine, she operated the eyelet machine in the samples production room. Maxine inserted an eyelet in Henry's ear, so now he has an earring. 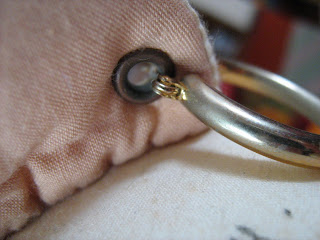 I haven't kept in touch with these people, mostly because a lot of them were already in other jobs by the day the factory finally closed.
After that, well, quite a few of them lived in outlying suburbs of Adelaide, like Salisbury and Christies Beach, so our paths just didn't cross.
Plus I was running all over town applying at every job network organisation I could find.
Well that was a big 3 year waste of time.....
Eventually I settled for volunteer work in the great outdoors, spraying weeds on roadsides, (not fun), clearing blackberries and wild artichokes from reserves, (also not fun), planting baby trees as windbreaks on farms, now THAT was fun! until I was accepted as a christmas casual with Coles.
But I still remember the work, the people, the friends I had there, and the memories are stronger whenever I look at Henry.