August 31, 2010
Not many of you out there know about my hubby L. He's a dysfunctional man, quickly bored with anything that has to be done every day or every week. He no longer lives with me.

Almost two years ago now, L was desperate to have a pet. My lease clearly states, in capital letters, NO PETS.
Between us we decided that goldfish might be okay, low maintenance, they wouldn't dig up the yard like a cat or dog would, didn't require large amounts of food and certainly wouldn't need to be walked or groomed.

So we bought a small aquarium, with all things necessary to set it up included in the box, and brought it home. There's nowhere here to put such a thing, so a plank of wood was put across the end of the bathtub and the aquarium was set up on that. Two days later, we brought home a half dozen comets. L promised he would do all the work necessary.

Here they are, swimming around having a wonderful time. I quite enjoyed watching them while sitting on the toilet, or cleaning the bath or shower. 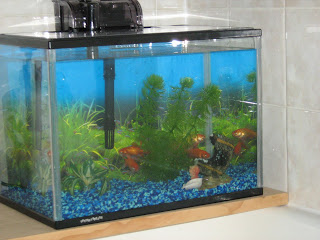 Well, soon enough, L decided that the bathroom was not a good idea, since we couldn't watch the fish unless we were actually in there, so he moved the whole affair to the kitchen sink, where it took up ALL the space I had on one side, making kitchen work damn near impossible as I have no bench space to speak of.

So, he moved the fish outside. He had them swimming around in a big old recycling tub with the filter pump hooked up to an extremely long extension cord. This didn't make much sense to me as we still couldn't watch the fish swimming around unless we went outside, so after another week or so, the fish came back to the bathroom.
Feeding them wasn't a problem, but cleaning the filter and tank soon was. L hadn't realised that it would have to be done so often. He got fed up with it and the fish were put back outside. They certainly weren't happy with all this moving and failed to thrive. One day I came home from work and the fish were gone. He'd had enough. They'd lasted less than a year.


THIS, below, is my fish, Chippy. Bought in the same week as the comets, housed in an old bowl vase that I found in a cupboard and set at the edge of my table, where he has been ever since. I change half his water once a week and do a full bowl cleaning once a month. There's no filter, just an air stone to stir the water and add a little oxygen. He's totally happy. 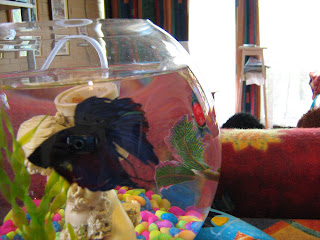 See my camera reflected there? ^
Chippy is a Siamese Fighter fish. He loves to position himself on top of the pot the little statue is holding and watch TV from there. I'm pretty sure he can only see the lights and flickering of the images, but he loves it. 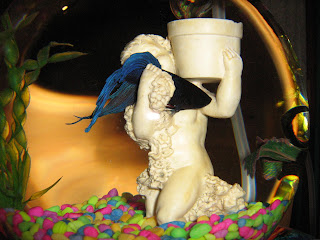 When Chippy was younger and smaller, he liked to sleep in the arm of the statue, but he's too big now, so sleeps down on the stones, sometimes almost lying down on them. I didn't know fish did that. He's learnt that the small salt shaker on the tray under his bowl holds his food, when he's hungry, he'll hover near there looking at it until I pick it up, then he shoots to the top of the bowl and waits for me to sprinkle some for him. He'll be two years old in January.
This, however, (below), is something I've always wanted and still hope to have someday, although maybe on a smaller scale. An outdoor pond, with those lovely large Koi that will nibble food from your fingers if you teach them to. Wide rocky edges to sit on and watch them from. Some overhanging rocks for the fish to hide under on hot days. Shady trees to keep the summer sun off the water. Maybe a waterfall to stir the water, just like in the picture. Some I've seen have a fountain, but I prefer a waterfall. Fish heaven. 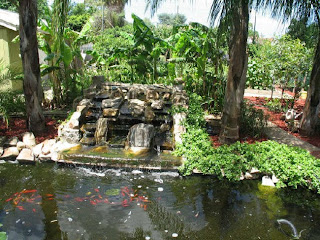