Still here?
Okay then.
I could be polite and say entrails, but I've never claimed to be a lady.
To me, guts is guts.


But still, not what you'd expect to see strewn along a major city road on a hot summer's day.
Or any day for that matter.

I've no idea what happened here.

As I was crossing the intersection of Portrush Road and Magill Road, I noticed a police car parked a little way past the intersection, with lights flashing and a caution, slipping hazard ahead warning up on its roof.
I wondered what the heck had happened and hoped nobody was hurt.
As I got closer, I saw for myself. And smelt for myself. Oh. Dear God.

From the intersection, along my side of the road to the next corner, was this. 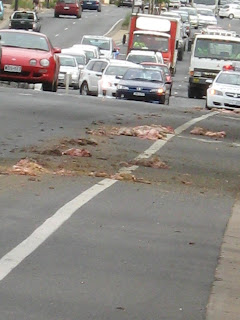 There are no skins, heads or legs, just the guts. Okay, entrails. 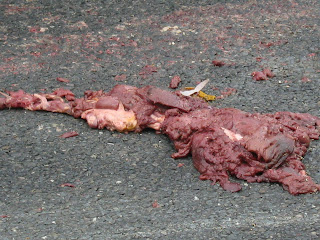 The smell was beginning to build quite a bit and many flies were gathering. There didn't appear to be anyone cleaning up, possibly a cleanup crew was on its way, indicating that this misfortunate happening was recent. 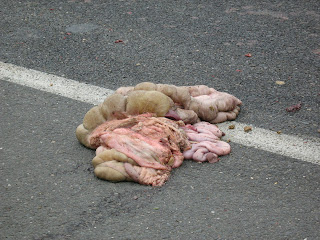 I'm guessing a truck had taken the corner a little to fast and its load had shifted causing a spill. 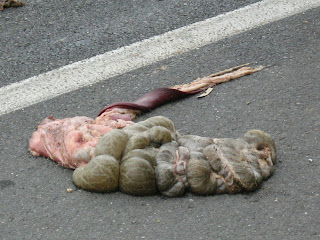 There's little indication of what type of animal this is, (was), but the smell tells me pig,
as does this next image. Looks very much like pork belly to me. 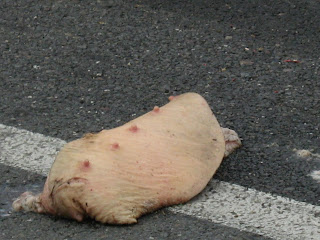 I haven't been outside since I took these photos, so don't know if the mess is still there. 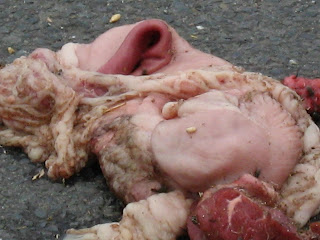 I did knock on the door of my neighbours, L and S, to warn them. They often go out at dusk for a short drive, possibly to shop or get dinner, and I was pretty sure they wouldn't want entrails stuck in their tyre treads. Imagine the stink, the ants and flies that would invade their carport and mine?