time to clear out the fridge

January 04, 2011
I woke up this morning full of energy and feeling normal, so after breakfast, decided that today was a good day for clearing out the fridge.


Shelves and crispers were emptied and washed down, tired looking vegetables were tossed, most other items put back.


But there were a few things that seemed to have been there forever, constantly being pushed aside or to the back, so I checked the use by dates. Things like mayonnaise, which I rarely use unless I'm making potato salad, then I use the whole jar....teriyaki sauce which I'd bought for a recipe, used twice, then shoved into the back of the fridge. Sandwich pickle that I'd bought aeons ago when I had a craving for fritz and pickle sandwiches. You get the idea.


Well!!
The mayonnaise dated back to 2007!! The fat free mayo looked a funny colour, I have no idea how old it was. I only knew it was still there because I didn't like the taste.
Just look at all this stuff taking up room in my fridge.
Tartare sauce? When and why did I buy that? Never mind, in the bin with it. 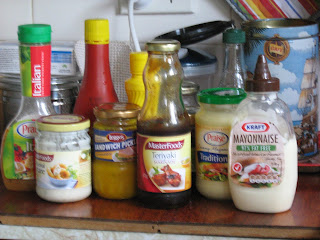 Once the fridge was sorted, I decided I might as well check the pantry.
Many items, like these below, are used frequently, so replaced often. I just gave the jars a wipe over and put them back. 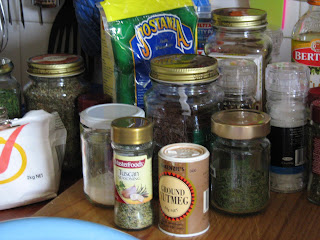 The spices however, are a different story. Like the teriyaki sauce, many of these had been bought to try a new recipe, then never used again. Things like caraway seed, turmeric, ground coriander, ground cumin. I had the open bin right next to me, so emptied containers as I checked contents.
There's only a handful that I use on a regular basis, along with the parsley. 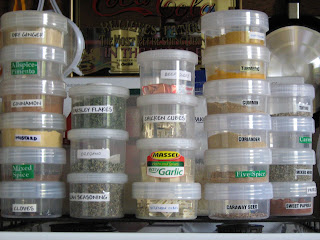 Other things I found were coconut, both dessicated and shredded varieties, probably still okay, but I don't think I'll ever use it, so out it went. Breadcrumbs, they were probably less than a year old, but they go stale and/or rancid, so out they went too. I'll buy a fresh packet the next time I make schnitzel.
Icecream cones bought for last summer and found right at the back behind the tuna and diced tomatoes. I nibbled one and found it soft instead of crisp, hmmm, chuck those.
The bin was quite full by the time I'd finished and I had much more space in both cupboard and fridge.
Quite a productive morning, if I do say so myself.